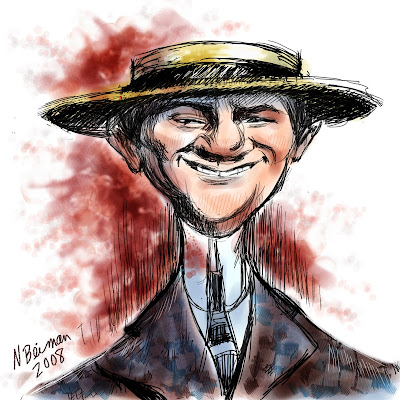 I drew this caricature of the
infamous Jewish gangster, BIG JACK ZELIG, for author Rose Keefe. Her new book THE STARKER is the biography of this very unusual gangster--and it conclusively solves a famous early 20th century murder case. (The Rosenthal-Becker case was the second biggest news story of 1912.) Ms. Keefe was kind enough to send me a signed copy of THE STARKER, and this is my way of paying her back...

Hello Nancy,he looks really like the drawing you did, to compare here's a photo of him:

I never heard of him before is a novelty,I begin to learn.BTW I love the Sherlockian drawings,one with a very big syringe XD!.How attractive looks Holmes when he's posing!:-)

Hi Denise,
There were gangs in New York from the 18th century on, and most crystallized around ethnic groups; the Jews and Italians mostly fought downtown, near where my own family lived a hundred years ago. My grandfather would have known about Jack Zelig's activities (he was born in 1901).
Interestingly enough Zelig worked with Italian and Black gangsters; he 'hired for talent'. Ms. Keefe described him as a 'gangster with principles'--a kind of oxymoron or impossible contrast. But that is why she wrote the book about him. I'm glad you liked the drawing.

And yes, Denise, that photo is on the cover of Ms. Keefe's book. There are surprisingly few pictures of Zelig and none of them bear the slightest resemblance to one another! I tried to get the personality rather than a literal likeness.

Nice work! I've been studying caricature a lot lately and really enjoy doing it quite a bit. Don't know if I am ready to sit in a park and draw people on the fly, though :-)

He reminds me of Alfred E Neuman.

Well, he has a space between his teeth, but I don't think he was a moron like Alfred and I certainly didn't draw him that way. His eyes are a bit scrunched up since he had the sun in his eyes when the original photo was taken...but normally they were large, and dark.
Can't please everyone, I guess.

Idragosani, it's no problem.. the more you draw people, the better you get. Just don't let them see you!

And Gorilla Bananas, you have a very funny blog!

BTW, regarding National Caricaturist Network, you should join! It's only like $40 a year, and well worth it. It's for pros and amateurs alike. They have a big convention coming this November in North Carolina.

It's hard to believe, by the way, that Zelig was only 24 years old when he was killed. The photos show a man who could easily pass for fifty. People must have aged fast then (of course, he wasn't in a very safe line of work.)

Idragosani, Pete Emslie recommends that society too; but I doubt if I'd be able to make it to their functions. It's an intriguing group though.

Yeah, I can't go to the convention either, even though it's relatively close. But it's still a good for netowkring and getting critiques and feedback on one's artwork.

Thanks for a wonderful drawing, Nancy. Now, I want to know more about this guy.

Rose Keefe's book THE STARKER is a terrific read, I'd also recommend Herbert Asbury's original GANGS OF NEW YORK for an introduction to pre-Prohibition hoods, one of whom looked like Nosferatu...another of whom was the inspiration for all those tough talking cartoon bulldogs in the Warner cartoons!
Ms. Keefe wrote me that the Zelig family were delighted with this drawing of their scandalous relative, and that they are all respectable now!

Thank you, King. I hope to draw another gangster of the period, Jack Rose (known as Bald Jack Rose) who resembled Nosferatu.
And there actually was a guy named "Ludwig the Bloodsucker" running around New York at the same time, CLAIMING that he was a vampire. I wonder if someone could do a vampire novel set in Gangster New York? It's a novel setting, anyway.