Frank and Ollie were right.

And I have a new blog on Substack. Why? Well, I might want to sell something there eventually. You can never tell.

Read all about it here.

I was interviewed for this podcast and they asked excellent questions.  Look at some of the others, too, it's a very interesting site.

The picture of me was my official Disney portrait, taken in 1995. If you look carefully at my shirt, you will see little Mickey Mouse hands and feet and pants in the pattern. Subtle. 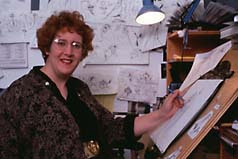 A nice shout out from a nice site

If you aren't visiting the Animation World Network site regularly, you should be. It covers 'worldwide' animation, not just the usual suspects. There are articles, reviews, and blogs...and today, there's this: along with a review. 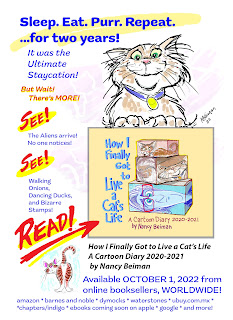 Writing a book or making a film and showing either one publicly means you listen to people who say its mom wrote it funny. (I left out the ugly part, and I want people to think I wrote it funny.)

So, we'll see what develops.

Leonard Maltin and Jessie Maltin were kind enough to mention HOW I  FINALLY GOT TO LIVE A CAT'S LIFE on their  October 2 HAPPY SUNDAY livestream.  The review comes at 1 :01 :30.    Thank you, Jessie and Leonard.

The book launched on October 1, and since it is the weekend, some things only will appear on Monday.

The first: Shipping. This is already happening, or so I am told. Good.  The second: Ebooks. Now, I know very little about the latter object, but they are the modern way to read a book. So, they are available. They are also listed at two different prices on ebook sites. This is a mistake. The higher price is the correct one. Just so you know. Ah, Mondays.

There are fifty 'diary entries' and four Pandemic Postage Stamps in How I Finally Got to Live A Cat's Life.  I drew more than fifty cartoons during the past two years. Many more. There wasn't a whole lot else to do, and not all the scary stories involved viruses.

But the other cartoons weren't cute little diary entries with cats. They were about an 'influencer' who wasn't imaginary like Sleazy Homemaker-- he was real.

He even got elected to high office.
Originally, I was going to have my diary be a novelty 'two books in one' like FLIPSVILLE/SQUARESVILLE  by Stan and Jan Berenstain.  *Yes, that is how their name is spelled and any 'alternate' is not from a 'mandela effect' --it's from functional illiteracy. You're welcome.  (And the line from SNOW WHITE AND THE SEVEN DWARFS is "MAGIC mirror on the wall." You're welcome.)
I believe that the Berenstains invented the technique. One character's viewpoint was seen on even numbered pages; the other's was there too, on the odd pages,  upside down, and you'd turn the book over to read the second version on the odd numbered pages. The back cover would become the front and vice versa.
So you'd read cute cartoons about cats on one side of my book, and a horror story about a horrible man on the other side. And no publisher wanted anything to do with this concept. Actually I didn't, either. I could have done this version when I self published, but I thought...the cartoons would be dated by the time the book came out. And I couldn't stand to look at the ugly faces.
Sadly, they aren't dated at all. A friend said that he, and perhaps others, would be willing to look at the ugly faces. Eager, even.

So, they will be posted here. You're welcome. 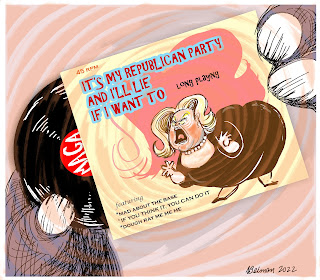 This one was just updated, because this record WILL NOT stop repeating, and it's being played by an entire party. (actually, we're the ones being played). The reference, for those of you Not In the Know, is to Leslie Gore's hit IT'S MY PARTY AND I'LL CRY IF I WANT TO.
I'll get to the others later on. There are about twenty of them. I can't stand drawing any more...but someone wants to see them. You're welcome.
Posted by Nancy at 6:34 PM No comments: 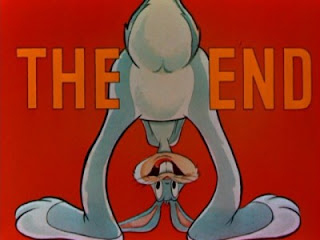 But that's NOT all, folks!  The book is released tomorrow, and there will be some exciting new announcements next week!

Stay tuned. This page is easy to update, and I have a link from  my portfolio site,
nancybeiman.com
Go there to look at films. Come here to see stuff I can't put on that other page, including over fifty cartoons about...well, you'll have to wait for the update.
Posted by Nancy at 9:14 AM No comments:

This wasn't supposed to be a book at all.

The cats took over the book because they insisted on helping. And they cheered everyone up.

A neighbor asked for printouts of each cartoon and assembled them in a sort of book. I saw that there was actual continuity, and the neighbor loved the cartoons, so I decided that maybe this could actually become a book.

But no publisher wanted it. So I did it myself. 'Little Red Hen Editions' is a good joke if you know the story.

HOW I FINALLY GOT TO LIVE A CAT'S LIFE is available from online booksellers worldwide. Ebooks will be available on google play and apple in the near future.