I bought a Flip Camera this weekend and shot this movie of Gizmo. Animators should all have pets (when they have money to take care of them, that is). Gizzy is quite inspirational...she has appeared in two of my books, modeled for most of my holiday cards since 2005, and she wakes me up every morning, meowing loudly for me to get up and play this game with her. We did this shoot at 3:45 AM recently. Seriously, I don't mind it...since Gizzy is nearly ten years old and is a loyal and extremely loving friend. I don't take her for granted since she very nearly didn't live to this year. Giz was diagnosed with malignant lymphoma last year and lost most of her large intestine in a very complicated operation...which saved her life. It's hard to believe she was even sick when you watch this footage.
Gizmo was given away by her previous owners; I got her when she was four, and she was very sick then too. I've pulled her out of the grave on two occasions. She was worth the expense.
Gizmo is a little clown (harlequin cats are all known as extroverted 'clown cats'). She is extremely fond of people, loves being photographed, enjoys watching this video, and is a huge fan of Nora the Piano Playing Cat. And she has a gravelly, deep voice, which sounds very funny coming out of such a tiny cat.
Who could deny such a charming creature the simple pleasures of a mink tail on a shoelace?
I never tire of watching her.
Cat toys are mostly dangerous and badly made, so I made this Minky for Gizmo; the tail was purchased from a furrier, and the shoelace is a leather, industrial model attached to a wooden dowel. She loves it...as you can see.
Posted by Nancy at 8:57 PM 2 comments:

First the good news: It's now possible to make an animated feature film by yourself without losing your shirt. In fact it has been for some time now, as Bill Plympton could tell you.
Bill has been joined by Nina Paley and Paul and Sandra Fierlinger. Each artist works in a different medium; Plympton draws on paper, the Fierlingers draw on the computer, and Paley is a master of Flash animation.
The films are doing well. Bill Plympton's IDIOTS AND ANGELS, which I feel is the best of his features, is playing in roadshow engagements. Nina Paley's SITA SINGS THE BLUES is getting rave reviews and is doing well in theatrical and digital distribution. The Fierlinger's MY DOG TULIP, though only in 'platform' release, is also getting good press.
The big-budget-by-European-standards THE ILLUSIONIST by Sylvain Chomet is nearly certain to have an Oscar nomination this year, as Tomm Moore's THE SECRET OF KELLS did last year.
All in all, this is a good thing, and I hope that more artists join the ranks of independent feature/featurette producers in the coming year.
Of the big budget films out this year, I rate DreamWorks' HOW TO TRAIN YOUR DRAGON highest. I enjoyed it immensely, it was beautifully directed and designed, the dragons were fantastic, and if the world was just, it would be nominated for best cinematography along with the live action pictures. I haven't seen chiaroscuro like that since PINOCCHIO. It's also the only 3D film I've seen that really used that medium well.
Will the modestly budgeted indie features indicate a new direction to the big producers? A film's quality doesn't necessarily correspond to its cost. Animated features with overblown budgets fail at the boxoffice not because they aren't popular, but because they don't make enough to cover their negative cost (which if you don't know, is double the production cost.) Some are grotesquely overproduced. Lower budgeted productions with good stories and interesting design would entertain audiences and make a good profit--IF the right people were in charge. The example of the independent animators can help the lions of animation as well as the mice.
Posted by Nancy at 7:32 PM 7 comments: 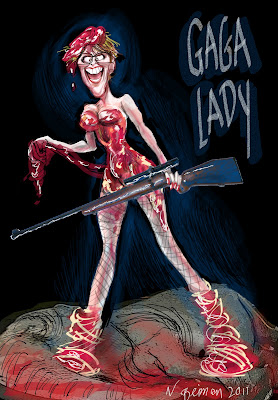 I had a notion to draw the most notorious woman I know of.
Posted by Nancy at 12:02 AM 4 comments: 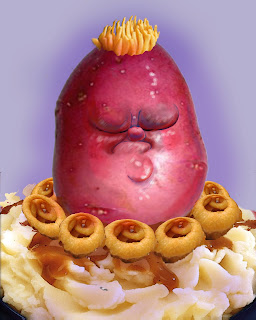 As long as I'm at it, here's a caricature I did of Toronto's new mayor, Rob Ford, who spends his time answering telephones and worrying about five cent charges for plastic bags while putting the city 60 million dollars in the financial hole on his FIRST day in office. (This must be the world record, but I'm not sure whether Bush did anything like this as well.). I swear, he LOOKS like an angry potato.
Posted by Nancy at 3:22 PM 2 comments: