Graduation went well. We were ushered into a rather hot parking lot on Friday to hear Bill Clinton give the commencement address. It was such a pleasure to hear a (former) President using words of three syllables, speaking in coherent sentences, and pronouncing ‘genome’ and ‘geneticist’ without stumbling.

I sat next to a professor who sniffed loudly and muttered sotto voce like Popeye for most of the speech. He may have been a Republican but he was also very rude. Fortunately he wasn’t loud enough to make much of a difference. I found him comic rather than otherwise. Why did he show up at all if he did not like the speaker?

The other honoree was a Mr. Sasakawa who runs leprosy clinics around the world and has helped save 15 million lives. This gentleman did not speak English but had a commanding presence on the stage.

I literally wore two hats during the ceremony. Faculty robes were reserved for me, but since I was graduating I stood in line with the Design students rather than with the Film and Animation faculty. More than one person came over to ask why I was in the wrong line; I explained the situation and received their applause (along with that of most of the students) when I finally did ‘the walk’ as the second grad student in the department.
The actual sheepskin will arrive in a few weeks but I am told that it is official. It must be official; I am wearing a school ring…
Posted by Nancy at 6:04 AM 2 comments:

YOUR FEETS TOO BIG (Legal edition)

My film is on the DVD insert. Color timing is bad but it's complete.
And no, I don't get royalties. The tradeoff was: the film was put on the disc without MY having to pay them, since RCA released the compilation.

That is why I will never again work with a track that I do not have full rights to.
Posted by Nancy at 5:48 AM No comments:

I have mixed feelings about YouTube. On the one hand I value it as a teaching aid--there is amazing nature footage that is either completely out of print or never released in this country. On the other hand they post a lot of material that is copyrighted, usually without notifying the owner. I've just had this happen to one of my own films.
I'm fond of honoring copyrights since I'm the one who, in this case, made a film and paid a very high price for music rights that did not include new media or home video rights. Someone else posted YOUR FEETS TOO BIG on YouTube, but I'm the one who will be contacted by RCA Records for copyright violation if it stays up.
So I did what I had to to and asked YouTube to immediately take the film down.
I then contacted CartoonBrew and told them that the problem was with the soundtrack; I don't care if the animation is posted online as long as I am credited with making the film, but any online posts cannot include the track.
My new film THE OTHER EDEN has a track with rights that are free and clear, but since I am entering it in several festivals that state that it should not appear online until after the festival judging is completed, it will not be available for viewing except on DVDS for now. Certain people have received prints and they will be asked to forbear from sharing it for the time being.
I do not enjoy using bootleg 0nline prints for teaching and would rather buy nice clean copies on DVD, but until some distributors see fit to release material that is now only available in other countries, I'll still view YouTube for the duration. But you will not catch me posting anything except comments.
Posted by Nancy at 11:04 AM 4 comments: 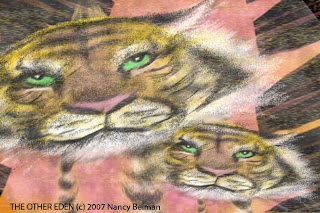 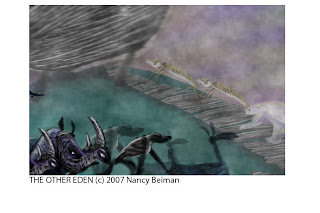 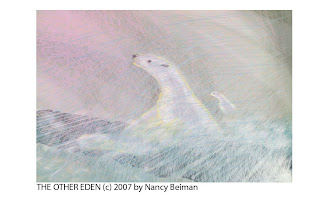 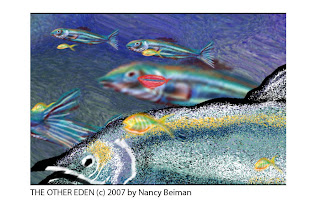 The original title was THE LAST but since my dad hated the title I decided to go to Shakespeare since over 1,500 other authors have done so for titles over the last four centuries. So a misquote from RICHARD II serves as an ironic title to this two minute animated film.
Posted by Nancy at 5:40 AM 2 comments: