BILL PLYMPTON Masterclass at the ROM 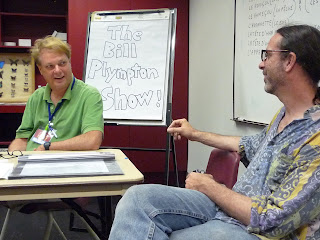 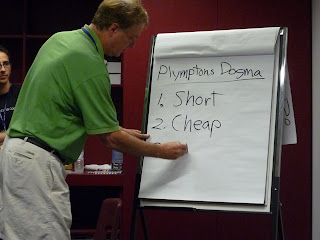 “I get up at 6 A.M and start drawing. I stop at 6 P.M.”
“Isn’t that hard work?” the interviewer said.
“No,” said Bill Plympton. “It’s a pleasure”.
So began the Bill Plympton Masterclass at the Royal Ontario Museum that was held as part of the Worldwide Short Film Festival. I’d actually heard that Bill was coming to Toronto at the very last minute, courtesy of that new social calendar-cum-bush telegraph known as Facebook. Bill courteously invited me to attend his masterclass and so here we were in the bowels of the ROM building, surrounded by neatly mounted animal skeletons. It seemed appropriate to have permanently grinning skulls as part of the audience. Bill’s humour is not soft and fuzzy and there is a cheerfully macabre tone to his work.

ADULT CARTOONS
“Cartoons have power. They can change the way people think. I like sex and violence in my animation; I don’t really think about children’s topics. I think about adult ones: jealousy, ambition, sex, and love.”

FEATURE FILMS
“HAIR HIGH I thought would be a hit. We had David Carradine and all these famous voice actors. It did not take off like I thought it would. After that I said, F**k it, I’m making one for myself—really LOW tech, all in pencil.”
“IDIOTS AND ANGELS (his latest feature) was a huge success. I did about 25,000 drawings for it. I did the color for the (short film) GUARD DOG on paper, but IDIOTS was colored on computer. I spent a year on storyboards and character designs and one year on the animation, drawing 100 drawings a day. We spent 6 to nine months in post (the sound, color, music, and editing.) The fact that it had no dialogue made it easier. All age groups love this movie. My mother likes it! It has a mystical, religious quality, a feeling of transcendence. Maybe that explains its popularity.”
“If you do music for your film be sure to get the rights first.”
“I’m not out to get rich. I like making films I like to make, and doing good work.”
“My short films have an average production time of 2 to 3 months.”
People think that short films are only an entrée. You can make a living at it.

· SHORT. The film should be five minutes long at the maximum. It’s harder to sell a 15 or 20 minute film.
· CHEAP. Digital production and Flash make production costs reasonable. My average is $1000.00 per minute; HOT DOG cost $5,000.00 per minute.”
· FUNNY. Audiences want a laugh. It’s easier to sell. Here’s my idea of the perfect animated film….BAMBI MEETS GODZILLA. (a film by Marv Newland.) This film took one weekend to make. It has only 12 drawings and is one and a half minutes long. To date it has earned $100,000.00. It’s the DEEP THROAT of animation.”

SELLING YOUR FILM
“Now after you’ve made a short film, what do you do with it? I do the festival circuit. Nickelodeon gets too much stuff. They go to film festivals so that they can see the good stuff with the crappy stuff screened out. I first realized that you could make it in short films at the Annecy festival. Distributors heard the audience applause for YOUR FACE (1987). I made another short film with the profits from the sales.”
“Sell your films to:
1. THEATRICAL. (Tournee of animation, the Animation Show)
2. NON THEATRICAL (Libraries, museums, airlines, corporations and schools. This is a shrinking market.)
3. THE INTERNET (Itoons, Atomfilms, Ipods.) My new film was immediately sold to Ipod…I make a lot of money on the Internet. It is a growing market and becoming more important. But I can’t sell a film to others if it is free on the Net. I take it down if someone rips me off. Possibly the exposure pays—it’s a lot of publicity.”
4. MERCHANDISE. I sell drawings, sketches, DVDS, books, and posters. There’s nothing new about this; Disney’s been doing it for 80 years.
5. COMMISSIONED WORK: Trailers, commercials, and films—but it’s another shrinking market.
6. APPEARANCES: I appear at schools and festivals.
So there are many ways to make money with short films.”

“I like getting up in the morning and making my own crazy films the way I want to make them. I do a feature every 3 years. I’m working on a new feature with a more exaggerated style of animation—taking reality just that little bit further.
Once a year I’ll do a short…I did three this year.. SANTA, THE FASCIST YEARS was done in a week (the animation was completed over the Thanksgiving long holiday weekend), HORN DOG was done in two weeks. MEXICAN STANDOFF took 3 weeks.”
“I do 3 key poses on the dog and put slobber in between them. Disney films use 20, 24 drawings per second. I don’t have the time, the money, or the patience, to do this so I cheat. I use pans, zooms, and only a few drawings, sometimes animating on 4’s. The audience doesn’t care; they only want to see the humour. I do garage-band animation.”

CHARACTER DESIGN
“The Dog is simple—a box with legs. Design a character and keep it SIMPLE! You have to draw it thousands of times.”

STORY INSPIRATION
“I saw a dog in Madison Square Park barking at a bird…I wondered why? I went inside his brain and imagined that the dog thought he was protecting his master from harmless animals that were really vicious assassins. I did 15 ideas for this film and tested them (I believe in testing!) and narrowed it down to 8 ideas.
In France they thought the Dog was a parody of George Bush because everything he did turned out so badly. But he’s just a funny dog, looking for love…and he fails.”

PRODUCTION
“I do all the drawings. It’s faster than hiring someone. My producer scans them in and colors them. I love drawing. I use straight ahead animation and spend 5 to 10 minutes on each drawing for the final tie-downs. I get in a ‘zone’ like a writer where it just flows…it feels like I’m on autopilot. It just happens. And the more mistakes in the drawing, the better. Finger marks and erasures add texture and substance that you can’t get in digital media. I don’t throw out drawings; I fix them and make them better. Cintiqs may be okay for some people but they’re not for me. I am old-fashioned; I prefer paper.”

TOPICAL MATERIAL
“I used to be a political cartoonist, but they date. Animation is timeless. I choose films about romance.”

CONFIDENCE
“I’m only confident when I hear audience applause. Then I know it is a success.
You have to believe that what you’re making is the best film ever made. It rarely is, but you need the strength and courage to commit all this time and money to it. Don’t do animation to get rich and famous. Do it because it makes you happy.
The process is what is fun. DRAW all the time. That’s the way to be an artist.”
Posted by Nancy at 12:13 PM 9 comments: 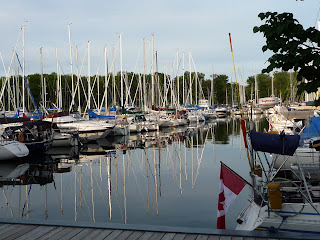 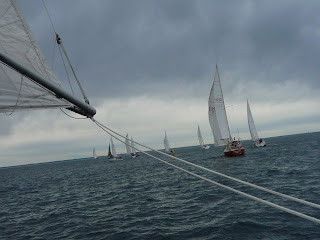 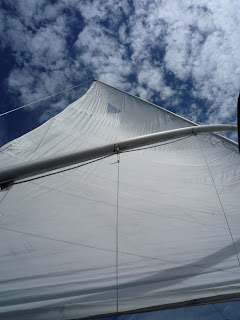 Here are some shots from the sailboat race to FIFTY POINT, a former 'malarial swamp' and current nature preserve/boat marina. My hosts, Jim and Rolly, were sailing the catboat BOO KNOWS whose sail and 'wishbone' you see here. Catboats allow the skipper to sit in the rear of the boat and control the sail with ropes, rather like a marionette string but not exactly. My function was to stay out of the way and avoid falling overboard.
It's been a very exciting couple of weeks, but the upshot of the deal is that there was a visit from an old friend, a visit from another one is taking place tomorrow, and I got approved for the Canadian equivalent of a green card! And oh yes, Gizmo had her first bath. All of these events except the bath were enjoyable--even though Gizmo now smells a bit more perfumed than usual. I will try to update this site a bit more regularly now that I'm going fulltime onto the book in two weeks' time...so thank you, gentle reader (all one of you) and enjoy the pictures!
Posted by Nancy at 12:06 PM 4 comments: