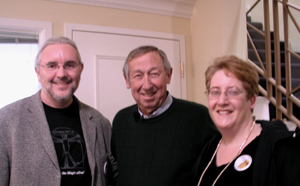 L to R: Tony White, Roy Disney, Nancy Beiman at the Everett Theatre
Posted by Nancy at 5:53 PM No comments:

I've just returned from Everett, Washington, and I refuse to make the usual 'flying' joke. Even if it is funny.
Tony White proved to be a gracious host and a really fun guy to meet. His labor of love, the 2D OR NOT 2D ANIMATION FESTIVAL, was a great success.

There were some rough spots at the start, most of them having to do with cars. Seattle has weak public transit and some of the most impressive jams I've seen since leaving Los Angeles. One of Tony's cars broke down and there was a hasty reshuffle to get me from the airport to Everett, a distance of thirty miles. There was a wee bit of time to get out to Fremont to see the cement troll under the bridge. It holds a real Volkswagen. (The bridge is over an actual Troll Lane. I don't know if the name preceded the troll or vice versa.)

There is also a 20 foot high bronze statue of Vladimir Lenin standing on a Fremont street corner. A local man went to the Czech republic after the fall of the Soviet Union, saw the statue lying there, mortgaged his house to bring it to the USA, and then died. The heirs are looking for a buyer and put Lenin on a street corner in the meantime since he obviously did not fit in the house. Tony joked that the statue could possibly be presented as an award at the festival. How , or why, it got from the Czech republic to Fremont is anyone's guess.

RIT's character animators took all but one of the top prizes for student films at the 2D or Not 2D Animation Festival held in Everett, Washington from November 17-19.

Tony White originated the idea of giving awards to animation in a film as well as for the film itself, so that good animation could be judged independently of the story.

Most of the work I showed for my own presentation was from Cal Arts, Jack Zander's, and the Berlin studio--in other words, really really rare stuff. I did not show anything from Disney, Warners, or Amblin'.

I also did a powerpoint presentation on my book that got a good response. The old Everett theatre is a former vaudeville house, with a small intimate stage and good acoustics. I joked about being 'first on the bill'--in vaude days, that was reserved for a low ranking act since audiences were still sitting down while it was on.
The audience here was attentive and seemed to really enjoy all of the shows.

The festival featured screenings of restored prints of ANIMAL FARM, retrospectives of Tony White's work, a tribute to Halas and Batchelor, and many other surprises.

Keynote speaker Roy Disney stated that he wished to 'refute that ridiculous statement of Michael Eisner's that 2D was dead. It is not dead, and the statement is not true."

Roy was awarded the very first Roy Disney Award, a bronze three fingered hand holding a pencil. They decided not to go with the Lenin statue after all.

Eric Goldberg's animation for a Buddhist theme park, featuring greedy monkeys, was another high point of the festival.
Films in competition were sent from as far afield as Germany (Harald Siepermann was the advisor) and Wales, with East and West Coast animation schools well represented though Cal Arts and Ringling were surprisingly absent--we'll get them to participate next year!

Michael Sporn's lovely tribute to Philippe Petit, THE MAN WHO WALKED BETWEEN THE TOWERS won for Best Film (professional category.) There was also an hilarious film from Wales about a man who owned a huge dog and a huge car--but a normal sized house. The entries were generally of a very high quality.

"Golden Pencils" were won in the student category by RIT seniors Brittney Lee, Joseph Daniels, and Jedidiah Mitchell, with Merit Awards given to graduate student Adam Fisher and sophomore Wesley Storhoff. Lee, Daniels, and Mitchell were all my senior project advisees, and Storhoff completed his project in one of my classes.

Some of the prizewinning RIT films from the 2D or not 2D festival are available online.

Brittney Lee's THE MUSICAL GENIUS OF MOZART MCFIDDLE is available online at http://britsketch.blogspot.com/
(Winner, Best Animation in a Student Film with Special Merit for Art direction)
Brittney Lee and her boyfriend Dave are both employed--she's already working as a designer at a games company, and he's a rigger at another.
Merit Award winner THE BALLAD OF THE PURPLE CLAM, is (partly) here: Adam Fisher's advisor was Tom Gasek (of Aardman, now of RIT)
http://www.mainefishproductions.com/

Joe Daniels and Jed Mitchell won the Best Student Film award for THE WAY OF THE MANTIS, tied with A MANO (from VanArts) Even though MANTIS appears to be hand drawn, it is in fact a CGI film that is rendered to look like paintbrush work--the students designed the plug-in for Maya themselves. The art direction was inspired by the films of Chinese animator Te Wei.
http://artofjoe.blogspot.com/

Merit Award winner Wes Storhoff's hilarious THE INFINITE MONKEY THEOREM is not available online. A chimp in a lab sits at a computer and tries to write HAMLET while continuously being interrupted by Microsoft's Mr. Paperclip Office Assistant. It was particularly amusing to see this film win an award in Microsoft's home town.
Mr. Storhoff produced the film in Nancy Beiman's 'one quarter project' class, which lasted ten weeks.

One student sadly did not enter his film, but it's gorgeous. Here's Nathaniel's website. http://www.rit.edu/~nhh0365/ I brought a print along to the show and ran it for Tony White, who expressed regret that it was not in the competition. Then again, we had to leave some room for other schools to win...
Nathaniel also made a strange little film called DINNER (both it and PYGMALION DREAMS were made under my supervision)
http://www.atomfilms.com/af/content/dinner_hubbell

All of these students save Adam Fisher have allowed me to use their preproduction artwork to illustrate sections of my book, which is now available for preorder on amazon.com.

A special Golden Pencil Award was also awarded to me, for training these kids. I was certainly not expecting that! Neither was airport checkin, who looked at the giant functioning pencil with appropriate awe when I checked in the next day.
The festival was well attended and we hope that it will be even 'bigger' next year.

So I'm getting ready for Turkey Day, which I'm spending with my upstairs neighbours and with several students from another country who had nowhere else to go for the day. I'm on break til December 4. I like teaching holidays; you get about four months vacation each year. Not that I had any this year or last winter; I was working sixteen hours a day on this book!

My book is now on amazon.com!

PREPARE TO BOARD is now listed on amazon.com!
Here 'tis....

Nice reviews from the blurb writers are included. Now all I have to do is see the thing actually on here...and realize that all that work actually LED to something.

Tony White has moved me from the Sunday Afternoon closer at the 2D festival to the Friday night opening act. I've got to DO something.

Here is my review of Neal Gabler's book from amazon.com:

Walt Disney has become a legendary character of the twentieth century. So much was written about him, and so much was inaccurate, that the legends often attained a currency that was not deserved. How many times have we heard that he was frozen? Gabler (who was the first of Walt's biographers to work with rare Disney family records) opens the book with this statement (it's not true.) The truth is much more interesting than that.Disney was an optimistic, hardworking go-getter with an astounding capacity for concentration who fell in love with the early twentieth century's high technology--motion pictures. Motion pictures drawn by hand.He had the perseverance to start over again every time he failed artistically and financially. And fail he did. This is one of the most unlikely success stories ever told, since the Disney Brothers studio was working in a marginal field (animation) in a minor city (Kansas, then Hollywood, when the animation studios were all in New York), and attempting to make it as an independent producer just as the big studios were forming, eliminating independent competition in all but a few areas by 1928.He made it because he had the unfashionable idea that quality would out, he had a tremendous amount of luck and he knew how to make appealing entertainment(Mickey Mouse was NOT the first successful character he created). Disney also had a real genius for hiring talented people. A surprising number of remarkable artists started with him in Kansas City, others were trained right on the studio lot.Mr. Gabler's book is readable and contains much new information. Who would have thought that Charlie Chaplin was, at one time, Snow White's Prince? Chaplin, one of the few independent producers left by 1936, loaned his books for MODERN TIMES to the Disneys to help them ask fair prices for their landmark feature. For Disney's weak spot was running the business--he once actually forgot to add on the profit to the budget for a job in Kansas City, and was forced to work for cost of materials, with no salary for him or his animators! The 1941 strike by his artists was seen as a personal betrayal--but this strike can be predicted when you read about that early project. The Dream was the goal but (as an old cartoon states) coal is still somewhat important. Disney had his head in the clouds, and his brother Roy, who played the father's role to his sibling since childhood, was a major reason why Walt's feet were kept on the ground. It was a fine parntership and this is really a dual biography.The truth about Disney is not sensational or scandalous--just refreshing after decades of inaccuracy and outright fabrication that somehow passed for fact.The weakest part of the book is Gabler's attempts to psychoanalyze Walt's obsession with animation production as a desire to control his world. Of course he controlled his world. This is what all artists do. We animators love creating characters that APPEAR to think and move for themselves. They are really just an expression of our own sentiments and desires; we create life. That's what animation means. It's wonderful being able to control every aspect of the film's production-to be leading man, leading woman, and sets as well! Disney is hardly exceptional in this respect and the psychological insights don't ring true for me.As one other animator told me, Disney was remarkable because 'he was the only man in the world who ever got 500 artists to work together in one building without KILLING each other!"Buy this book.