Death (and Resurrection) of an Animation Desk 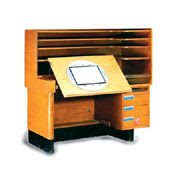 I always wanted a Disney "Mighty Wurlitzer" animation desk. These were built in 1939 for the new studio in Burbank, and they were a real status symbol for those of us at Features fortunate enough to have one in our offices. (This was a political issue, by the way, but more about that later.) They looked so solid and permanent. They also were considerably better designed than the "Florida desks" made for the second Disney feature animation unit. These were smaller, which was not a bad thing, but their shelves tapered upward until there was nothing but a two inch ledge at the top suitable to hold nothing more than a flower vase or (in the case of one Catholic animator) a vial of Lourdes water.
When I worked at Disney I had the smallest office in the Hat Building, and a Florida desk. One day I had my door open. A Mighty Wurlitzer, disassembled (they were modular) was being pushed by on a dolly. "He's already got one. This goes back to the warehouse," the men were saying. I popped out of the door and said, "No it doesn't go back to the warehouse! It goes in here!"
And yes, I was given permission to have the desk installed. If you read my interview on the AWN from 1997, I'm sitting in front of it. What a marvellous piece of furniture it was.
Well, they weren't available for sale--at least not then--and so I decided to hire a carpenter to make me a Wurlitzer of my own. This was easily done. I then drew up blueprints based partly on my office desk and partly on an inker's model owned by animator Mark Kausler. This was much smaller than the six foot long Wurlitzer and it might have made more sense to duplicate it entire, but I wanted a Wurlizter and so I was going to get one.
The changes were small but significant: I widened the desktop on my blueprints so that the new, huge exposure sheets we were using would fit well. I also added the 'ears'--very nicely made cork boards on hinges for model sheet and other displays.
Three of these were built. Two other Disney artists made arrangements to have them constructed, which brought the price down a bit. Interestingly enough since the hole for the disc was off center, the desk could be right-or-left handed. Both of the other animators were southpaws, so I got the only right handed model.
It paid for itself within the year, but another problem arose. It was never designed to be repeatedly disassembled and hauled around the country. It also did not fit through a standard door; another modular bit had to be built so that the top shelf could be removed to fit through the door (and pegs held it together.)
Now I'm moving to Canada and the apartment simply doesn't have a large enough second bedroom for the Wurlizter and a computer desk/printer arrangement.
So I decided, after months of agonizing, that it wasn't worth it; this wasn't, after all, a real Disney desk, but one that I built. It was and is a useful desk. Part of it still is. I'm taking the top and the 'ears' with me, and I'll make a truly modular desk out of metal shelving, attaching the top to it with hooks. It's easy to do, sturdy, and doesn't even require a blueprint. Best of all I can add all the shelves I like, and I have decided I need a U shaped model that wraps around, rather than a six foot long model that takes up most of the room.
Most importantly, I can put it together myself. I am able to get the top and the 'ears' off the Wurlizter, but I can't budge the shelves. This is a problem when you are doing everything by yourself during a move.
My decision isn't completely final; at this writing, the desk is still sitting in the office, with the top and ears packed in boxes. I could change my mind. But probably I won't. Times have changed and I now do most of my work on the computer. I have a small portable animation desk that adequately handles the 12 field paper that newer Toonboom and Flash based projects would use. A 16 field disc might never be necessary again.
Plenty of people have worked without Wurlitzers. My friend Dean Yeagle has Preston Blair's old desk; it's nothing more than a drafting table with a hole cut in it, the same that most of us use.
Then again, maybe I could measure the top of the tabouret again. MAYBE the new printer would fit on the side. (the old one is dying and is not worth shipping to Canada.)
Perhaps the Wurlizter will survive in two pieces: the animation desktop assembled on a new metal frame, and the base used for the computer desk? Could this be possible?
As Bugs Bunny used to say...hmmmmm COULD be!
Perhaps it won't leave at all--it'll just go through a little metamorphosis.
Posted by Nancy at 7:02 AM

Great desk, Wish I could take it off your hands, sigh..

Oh, that's a real Disney desk...and if I owned one, there'd be no argument. It would go.

The reproduction is ALMOST as nice, though. That's why I am planning to leave the cheap computer desk behind and bring the animation desk along in two pieces...it'll be a computer desk, with the animation top in a modular frame so that it can be knocked down if necessary.

If I owned one of the REAL Wurlitzers, it's a keeper.

I've just asked a student neighbour who is in woodworking to make a shelf for me that can fit over the hole in the front of the desk. My design is close to this Wurlizter--you can see there is a gap when the tilt top is removed.
The animation desk will split in two and become a computer desk with the animation tilt top reassembled on a true modular desk. Best of both worlds.

I purchased your storyboarding book and have poured over every page many times over and each time find something fresh and new. The interviews at the end of the book are also excellent. Thanks for taking the time to write a book that delves into boarding for animation.

Thank you for your nice comment. I wrote the book since the existing storyboard books were all about live action or television animation and these were not adequate for my classes in storyboard. It's good to hear that it's helping others too. Story is the weak spot in many animated films, and I was lucky enough to study with people who'd learned from the ground up but never wrote books on the subject. Enjoy! and good luck with your projects.

I passed on buying a Disney desk a number of times. I truly love them - - they're just too darn big to move around.

I had Tom Carter's carpenter build me a desk that I still use today. It's great, but that Disney desk is still the masterpiece.

Thank you for visiting my blog and commenting on my work. Its good to recieve critiques from a proffesional.

I am interested in knowing what to put in a Comics Portfolio. My friends are always telling me that it is my strong point and that I should focus more on that.

How great that something survives from the Tom Carter 'expensive desk' studio. Is yours made of mahogany?

Mine is really well made, it just still needs a top. Should know by Monday what's up with it. I think I'd be a bit stupid not to take it.

Hi Jesus, I've written you off-blog and sent you some links. Each syndicate has pretty much the same standards, but some give you more instruction than others. Floyd Norman (also known as Mr. Fun) is a member of CAPS and if you go to a meeting, he can look at your stuff too.
Floyd, Jesus is a Cal Arts grad with a portfolio that looks very appropriate for panel gag strips and comics--he wants to do storyboard too...