Crap Food from the Seventies 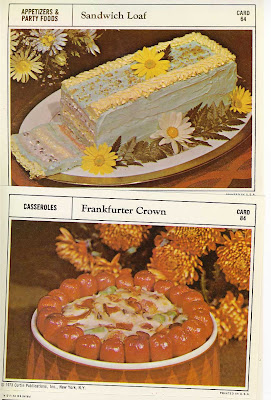 This stuff is too awful to even be junk food. Junk food is stuff that people LIKE to eat. I doubt if anyone ever prepared, let alone ate, Dish Number One. It is the ugliest 'sandwich loaf' I've ever seen. Even James Lileks can't beat this. It's in gross, 1973-era color. I don't know what to hate first: the purplish, lumpy interior of the decomposing blue log? The reddish streaks on the side? or the cheery flowers that lend the only 'natural' touch to this utterly disgusting mess?
The finishing directions are all that I'm willing to print of the actual recipe. "To finish: Frost top and sides of loaf with green-tinted cheese; make a decorative border of yellow cheese. Garnish with fresh flowers or use other garniture--radish roses, carrot curls and stuffed olives."
Note to self: NEVER EAT BLUE FOOD. It's a good rule.
Americans are suckers for royalty and this apparently extends to the humble casserole dish. This particular set of recipes (THE COMPLETE FAMILY RECIPE CARD SERIES COLLECTION, 1973) features not one, but two, crowns-o'-food.
Poor Crown-o'Franks was assembled from cream of chicken soup, milk, potatoes, bacon, onion, a few green beans (as a sop to those Natural Food freaks that were just becoming noticeable at the time) and of course the franks, obviously not kosher.
It seems that someone tried to liven up this rather depressing repast by arranging the franks so that they formed a little crown. How cute. The other crowned recipe in the set, stunningly named "Burger Beef Tiara" featured Bisquick biscuits surrounding chopped meat and a few disconsolate stringbeans. This tiara wasn't designed to be worn. Just admired.
Posted by Nancy at 7:19 PM

Ewww... my mom has some old 70s cookbooks with that kind of crap in it... I don't think she ever fed us sandwich loaf like that, though. Lots of stuff like pimento cheese and liver cheese, though...

I love James Lileks' site, but it really only scrapes the surface (literally) of bad food from the past. All that 'convenience food' was made into some of the ugliest crap around--no WONDER the 'health food' movement started at this time.
I have incredibly hazy memories of a childhood party where someone else's mother made a Sandwich Loaf. No one ate it. She at least forbore to use the green food coloring--that would probably have scared the kiddies straight out of the room.