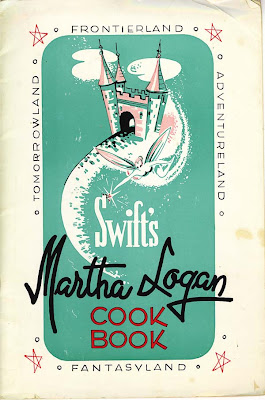 Get a load of what I found in a junk shop in Rochester!
And believe it or not, I can't find reference to this anywhere else. It's from the CNE, which appeared to be related to the yearly Canadian National exhibition now held at the Rogers Centre in Toronto. I have no idea where it was held back in the day.The back cover states that Swift's, which sponsored the Disneyland program, was celebrating its 101st anniversary the year this undated cookbook came out.
This means it's from 1956. What's curious is that the Tinkerbelle character who appears throughout the book looks nothing like the Disney version at all. She looks like she's burning up the entire kitchen in the illustration for WALTZ OF THE FLOWERS TARTS. Other Disney-like illustrations appear occasionally. There's a castle, sort of, on the cover, and a pumpkin coach that has been modified to look like a casserole dish later on (actually, this is a very nice touch). My favorite illustration is called HAVE A DISNEYLAND FRONTIERLAND PARTY FOR THE KIDS. The two kids in the picture look like homicidal maniacs, or maybe they're just upset. After all, they're just disembodied heads with glazed expressions. "PLANNING ADDS ZIP TO THE PARTY" (No Zip-a-dee-doo-dah, folks?)
The planning is described in somewhat alarming terms.
GAMES ARE ESSENTIAL
KEEP THEM OCCUPIED ALL DURING THE PARTY
The caps are theirs. There IS something wrong with the kiddie guests. Probably they're on work/study from the local pen. Keep 'em amused and nobody gets hurt.
Some of the suggested games include normal stuff like Pin the Tail on the Donkey. But hey, it's 1956. That game is just for the cowBOYS. "Little girl Indians could quickly dress a papoose, if you handed out some rags, scissors and a small plastic cupey (sic) doll." Some fun. I think they meant kewpie.
Adventureland calls for a barbecue. "Get your husband or a volunteer to start the fire early..." Yep, it's definitely 1956. Most women couldn't be trusted with matches and lighter fluid back then.
Since this is Swift's show, most of the recipes call for ham and other meat products. There is a halfhearted attempt to work Disney into the mix with things like the Waltz of the Flowers Tarts, which I half expected to be meat-based. They weren't, and the cakes might actually be nice if made today. FROSTED CANNED HAM was, however, distressing.
The TOMORROWLAND section has some of the finest writing in the book. "When you wish upon a star what are your expectations of the dreamland just beyond the rainbow?...Maybe your dreams are as sophisticated as a slick ranch home--or perhaps something just as simple as a new outfit."
What else can I say.
I'll try scanning in some more of the illustrations from this incredible book.
Incidentally, it was written by someone named MARTHA LOGAN, but she's no relation to the character on TV today.
Posted by Nancy at 3:17 PM