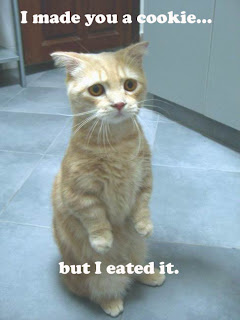 You clever Lady, always wished I could draw better. As for cats it reminds me of a picture my Mother used to have on her Bathroom door. It was of a burmese cat looking like it just got away with eating tweaty pie.. The caption was, "I used to be conceited, now I'm perfect!
Be Good
Monica

Dear Monica,
Thank you for the nice comment about my work. I always say that the only people who can't draw are the ones who don't pick up a pencil (whether digital or 'analog' is unimportant.) Draw and you will get better. It's as inevitable as death and taxes.
I visit the lol cats every day. Some clever fellow is even doing a comic strip about them in the style of George Herriman--wish I'd thought of that first!
And I like your Mom's caption. Kitty photos online differ in one important way from the older cards and things: the language. Some of it is a little impenetrable but most of it is funny.
Thank you again for your visit!

That's a great photo and caption, Nancy. Thanks for bringing some humor into my world-weary life.

The site is updated every day, Daniel, and while they can't all be winners, most are very funny indeed.