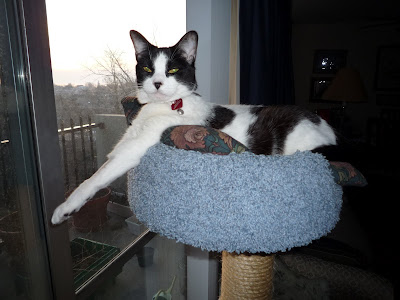 I had no idea, when I got this unwanted little cat in November of 2005, that she would prove to be (a) a wonderful animation model and inspiration for many illustrations in two books; (b) as friendly and loyal as any dog; (c) so sickly that her grievous illnesses would cost me much more than mere money. Gizmo is not just a cat; she is a friend. And when friends get sick, you help them.
Fortunately Gizmo is also a survivor. Her nicknames "Tenacious G", "Iron Kitty" and "The Fighter" (this last one, admiringly, awarded from her vet) were awarded after she survived large cell malignant lymphoma that entailed the removal of most of her large intestine in March of 2010. This is a picture of her recovering just after she came home from hospital on March 20, 2010.
Her operation took place on the 18th. Does this look like a sick cat to you?
Since then Gizmo has had another close scare in December of 2011...this one, (a nasal polyp) nonfatal, though just as pricey and difficult and painful to remove.
But she seems to have beaten both of them.
And this is quite an achievement, because the vet did confirm that all of the other cats with large cell malignant lymphoma have died within two years of diagnosis.
Gizmo even beat this cancer without chemo. I wouldn't get it for her and it wouldn't have helped anyway. But she is still here. The anniversary of her surgery: March 18th, 2012. It's been two years. She is possibly the longest lived survivor of this condition.
She is indeed a Fighter. And I say this with great admiration.
Posted by Nancy at 8:12 AM

Thanks for this good & excellent work. you should have to continue it forever.....