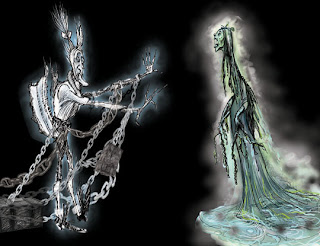 I would like to sincerely apologize to the occasional readers of this blog for the absence of posts. Truth is, I have been busier than a one armed paperhanger on my new book (one of my illustrations for Chapter Six is reproduced here.)
ANIMATED PERFORMANCE is now written and the last few illustrations are being cranked out just before I start teaching storyboard for the fall term at Sheridan. I will be doing the cover last, and fortunately there is time in my schedule to do this and other changes after first taking care of my classes. Having a book published is a little like being pregnant...at least according to my sister's account, since I have never been. The difference is that you can go back and do some genetic engineering and recombination on a book while it is in development.
I have also finally gotten onto Facebook, which turned out to be an astounding contact source for literally hundreds of animators. I'm on some of the 'professional business' sites too, but Facebook is much more immediate and effective. I admire the designer of the Facebook engine. What a brilliant idea it is to have a way to communicate with others without the need to remember individual, oft-changing changing emails! You can meet new people whom you may not know in pserons, but can still 'friend'. The graphics and linking facilities are also superb.
Several other artists, including Elliot Cowan, Simon Ward-Horner and Barbara Dale, allowed me to use some of their artwork as illustrations. I'd heard of all three, but could not speak with them as well outside of Facebook.
And I am notorious for throwing food at people there. Lily Dell, in New Zealand, got me involved in Food Fling!. I love the idea of throwing messy food without actually wasting anything.
Since animators do most of their networking socially, this site is a gold mine for us. There is even a small studio, Pink Slip, that announces all its meetings and openings on Facebook.
Of course a number of my students are also on Facebook, so I would no more consider discussing work issues there than I would here. But some students prefer Facebook to the email. Production groups also set up pages so that they can easily communicate with their classmates on project issues.
Anyway, to return to the old-style medium of the book....ANIMATED PERORMANCE is going to be a very nice looking book, and so far, we are ahead of schedule on production. I feel that a book is a very useful thing for a professor to have, especially since the environmentally-conscious province and college would like us to distribute fewer paper handouts. The book helps codify the lessons and it's a lot harder or at least more expensive to leave lying around in the classroom.
Most of ANIMATED PERFORMANCE was written during the June-August summer break. I got my contract in February and fell ill in March, and had to put the project aside entirely, since my limited energies had to be used for my day job.
It will be published in July, 2010, and I want it to be good. We'll see if others agree.
Yvette Kaplan did a yeoman (or yeowoman) job as professional reviewer; her suggestions were outstanding and made this book a lot better than it otherwise would have been. Positive criticism, even strong requests for change, are never to be taken personally, and I did not do so. I asked Yvette to do this because i knew she would not view the project through rose coloured glasses but would tell me precisely what she thought of it.
Of course the readers will probably do the same.
Anyway, I'm coming down the home stretch, and will be posting here more often, if anyone is still reading.
And yes, this essay will be mirrored on facebook...
the 21st century has its good bits, so far.
Posted by Nancy at 7:55 AM

You know, I've never met Yvette but we've exchanged a number of emails and she seems to be the nicest person ever.

Nancy, thanks for this! And Elliot, nice to meet you through Nancy! This blog is wonderful. Best, Barbara

I am finding posting to a blog almost superfluous these days as more people are more likely to read Facebook on a regular basis (unless they use something like Google reader to read blogs...)

Yes, but three of you did post here, so that makes a few at least. I'm also mirrored in a few places, including a nature lover's blog in England. Strange but true.

Hi Nancy, nice to have a date for the new book. I'll definitely get it when it comes out. Loved the first one :)
I looked for you on Facebook when i got registered last year, but couldn't find you. I'll do another search in a minute and will send you a friend request, if it's OK with you.