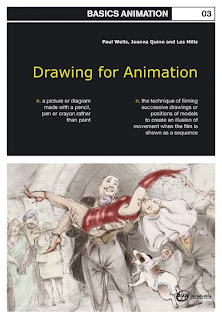 Joanna Quinn, one of my favorite animators, has just co-authored a book called DRAWING FOR ANIMATION with Paul Wells and Les Mills!
http://www.avabooks.ch/index.php/ava/bookdetails/978-2-940373-70-3

It will be released on December 9 in the USA, and I can't think of any animation book I'd be more eager to read this Christmas. Quinn is a stunning draftsman and animator whose only other book (that I know of) was illustrating a tie-in book for her charming Charmin' toilet paper commercials (you know, the ones with the bear in the woods). Mills is co-producer of her films (made in Wales at BERYL PRODUCTIONS) and a fine draftsman in his own right, and Wells is a professor and the author of several other books on animation.
I am going to talk this up to the Sheridan life drawing and animation teachers...what a wonderful looking book this is.
It discusses more graphic drawing styles along with Quinn's magnificent caricatures of human anatomy, so it should appeal to all students in advanced animation and character design courses.
And by a remarkable coincidence, my previous editor has shifted companies and is now with this publisher. I am going to see if I can contact them about my new idea for a book.

Posted by Nancy at 5:10 AM 4 comments: Links to this post

I was in the first grade. The public address system came on at approximately two o'clock; we were told that school was dismissed since President Kennedy had been shot.
I walked home (can you imagine a six year old girl walking eight or so blocks to her home, all alone, from school? This was indeed a long time ago.) Some teenagers I met en route were crying. They told me that I should put my head down and cry too, so I did. I did not know what was going on.
As I reached the front steps of the house my mother yanked me in by the arm and slammed the door behind me as if the outside world was no longer a safe place for me. She was probably right.
The television stayed on for the next four days, and we stayed in front of it for most of that time. I don't remember sleeping or eating though I suppose we must have done both.
We did go out once. We had to get our best clothing on for Saturday for a special service at the synagogue where the rabbi led us in the prayer for the dead (Kaddish) for the soul of John Fitzgerald Kennedy. My spring coat was too small. I can still feel the scratchy crinoline and too-tight gloves. I scuffed my feet in the dead leaves as we walked home and back to the television.

YouTube has riveting, uncut footage of several hours of CBS News' coverage of the assassination. It starts with a soap opera, and several commercials actually air after the first announcement of shots is made. Then it switches entirely to the CBS newsroom alternating with shots of the Market Hall in Dallas, where a black waiter is seen crying and wiping his eyes with a table napkin. Few other people in that crowd appear to be affected as strongly. It is amazing to watch Walter Cronkite's reaction to the news as it develops--he is a consummate newsman, but there is a catch in his voice well before the official announcement comes (Dan Rather breaks the news of Kennedy's death ten minutes before official confirmation arrives). Cronkite repeatedly takes his glasses off and puts them on again and there are beads of sweat on his forehead.

We are a good deal more cynical and distrustful of politicians now than we were then, but the Kennedy assassination was mourned in heartfelt fashion by men and women of all races and creeds, all over the world. The miracle of the Internet brings the horror of that day back in black and white--and also in uncensored film of the horrific assassination. It is riveting and sickening stuff.
Posted by Nancy at 7:28 PM 4 comments: Links to this post

I had a bittersweet Hand Drawn Animation Day...it appears that Focal is publishing a book by another author on the same subject I wanted to write about.
They were nice about it, and said they would like to hear about different book ideas I can come up with.
The thing is this. This is the book I want to write. I am confident that it handles the subject in a completely different fashion from the one they plan to publish. I am sure that it will be useful to a variety of artists, and can be a better 'seller' than PREPARE TO BOARD. It's all business, of course, and I shouldn't take it personally, but I am not happy that this is happening. I liked working with Focal.
And since I want to write this book, and not some other, I'm looking for another publisher, much against my preferences...but it's like working for a different studio; there are other ones out there. The trick is to find a nice one.
Posted by Nancy at 8:12 PM 5 comments: Links to this post

Friend and master animator Tahsin Ozgur has sent this request from Istanbul, Turkey, where he's currently teaching animation. International Hand Drawn Animation day originated in Turkey, and they would like to make it a worldwide celebration. So view a Bugs Bunny or Mickey Mouse or Joanna Quinn or Sylvain Chomet or other hand drawn cartoon of your choice tomorrow and think of pencils rather than pixels...as for me, I'm going to run the documentary "Frank and Ollie" and think of old friends still with us through their wonderful animated performances.

As in previous years we at Anadolu University and Maltepe University are observing Nov. 18th, anniversary of the release of Steamboat Willie, as a day to celebrate traditional hand-drawn animation.This year our
special theme will be Frank and Ollie, since Ollie johnston passed away since our last celebration.
Please join us in our celebration.
Tahsin ("Tash") and Lale Ozgur

Posted by Nancy at 5:03 PM 4 comments: Links to this post

Chinese PREPARE TO BOARD Book Cover 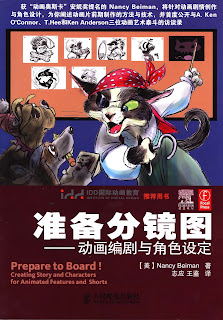 Posted by Nancy at 7:15 AM No comments: Links to this post

I've just gone for my medical exam that is necessary for the Canadian Permanent Residency application, which I'm told is going along very well. Maybe they will give me one as a Christmas present, but it's safer to bet that this will occur in the new Year.

In the meantime, I have just received the Chinese edition of PREPARE TO BOARD!; and the edition appears to be sold in China only.

They took great liberties with the layout, and some of the artwork is now really too small to see; but by and large it appears to be the same book. I'll ask a Chinese student to read a bit and let me know if it is a fair translation.
Posted by Nancy at 7:09 AM No comments: Links to this post

There's No one as Irish as Barack Obama

This song is absolutely wonderful, even if you didn't vote for him....

Here's the original version by a group called (ahem) Hardy Drew and the Nancy Boys....
Posted by Nancy at 5:53 PM 3 comments: Links to this post 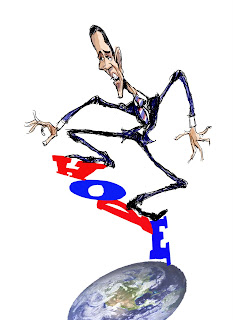 Good Luck, Mr. President-Elect. You're going to need it.

But I liked what I heard on the radio this morning, so here is my first drawing of Mr. Obama.

Posted by Nancy at 1:06 PM No comments: Links to this post

Steve Bell (cartoonist for Britain's THE GUARDIAN) is one of the best political cartoonists out there.
He's not polite.
Political cartooning, particularly in Britain, has never been pretty, polite, or respectful of politicians, and this is a refreshing contrast to the 'funny' school of American political cartooning that started during the Reagan administration.

Here is one of his best recent caricatures:
http://www.guardian.co.uk/commentisfree/cartoon/2008/nov/03/sarah-palin-bribery

Bell also has a highly original caricature of Barack Obama here, though I think he missed on John McCain:
http://www.guardian.co.uk/theguardian/cartoon/2008/nov/04/uselections2008-johnmccain

I wonder what sort of caricatures people will be doing of President Obama in six month's time? Right now, the cartoonists are definitely giving him a 'honeymoon period'

"If you can't stand the heat, get out of the kitchen." --President Harry S. Truman
Posted by Nancy at 11:27 AM No comments: Links to this post

Second Edition of PREPARE TO BOARD!

I've just received two copies of the second edition of PREPARE TO BOARD! from Focal Press. It has several corrections (all but one are new illustrations).

In the first edition, I inadvertently credited Bruce Block's book to his brother Dave. This error has been remedied.

There are new illustrations from SITA SINGS THE BLUES to replace the very low-resolution images that were in the first edition; and a better one of Bill Robinson's "Suzette" character.

So you don't have to run out and buy this...unless you absolutely HAVE to, of course.

Now this is a bit nutty, but I've got a new proposal in with Focal right now, and should hear from the editors in the coming weeks whether it's something they would like to consider publishing.
Since PREPARE TO BOARD is doing very well (thank you all!) it may have a chance. Watch this space and you may see...
of course, it also means I go into serious work overdrive for the next year, but I think I can write it during the winter and summer break here. The new book will be much different in that most of the illustrations will be animation drawings done by me. Oddly enough that makes it easier to do, since I won't have to track down different styles, etc. though a few friends might contribute a few.

The topic is one that has been lightly covered in the literature, although it's crucial to the creation of good animation.

Posted by Nancy at 6:38 AM 4 comments: Links to this post 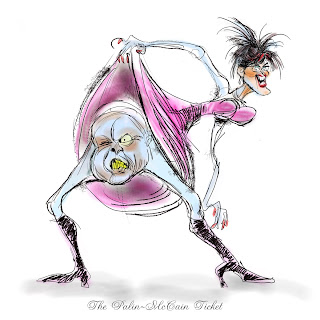 Hi all.
Congratulations, fellow US citizens, on your new President.
Now, I've known cartoonists to deliberately vote for the wrong candidate because it was easier to caricature them. Fortunately this practice was abandoned last Tuesday.
But there is no question that the losing side was a lot easier to draw than the winners. I am probably going to post a nice caricature of Mr. Obama in the next few days, but in the meantime, I'm posting drawing that some readers may find offensive. But, in my opinion, so was their campaign. I was worried to see political candidates actively appealing to racists and neo-Nazis in a way that I have not seen since the bad old days of governors Lester Maddox and George Wallace in the segregationist Sixties South. (Update: The Secret Service has just weighed in on this subject--and curiously enough the article is in a British paper.)
Most of my friends found it hilarious, and so I'm putting it here as a farewell to a truly bizarre political 'team', one half of which won't be caricatured again for...at least four years...
Those of you familiar with the French satirical magazine L'Assiette au Beurre will recognize the source of the imagery--a 1901 caricature of English king, Edward VII.